By Jenn Steinfeld on April 1, 2016 in Events, Politics, Queer Culture 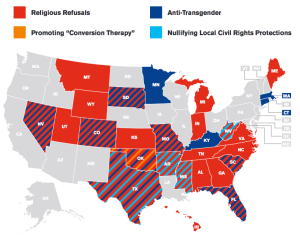 Since North Carolina fast-tracked the hateful HB2 into law last week, I’ve been struggling with how to talk about it. This bill was not the first time we’ve seen hate filled legislation limit trans rights, nor was it a unique use of rape culture and a complete misrepresentation of trans women to whip folks into a frenzy over men in dresses committing unspeakable crimes in women’s restrooms.

There’s been a growing movement, called preemption, where states pass legislation that prohibits municipalities from passing workplace protections like paid sick days or higher minimum wages. Sometimes, states truly preempt local control over these issues before any localities change their policies. But sometimes, states pass legislation after an advance has been secured in a municipality or county, thereby removing hard won rights from folks. This can lead to a sense of powerlessness that makes it even harder to build local, community-based progressive movements. Grassroots Change has more on the topic and a map that tracks a few topics with frequent preemption bills.

And this legislative season is the first time I can remember that we’ve seen right wing leaders “weaponizing transphobia as a lever to move their agenda”.

The mainstream press is reporting on the transphobic tropes that have led to the passage of the legislation. But there has been very little discussion of the attack on low-wage and hourly workers, the right of any existing protected class under state law to sue for discrimination. As a compatriot who helped me craft this post put it, “a black disabled trans woman just went from having a few ways to get justice for the many different ways she might experience workplace discrimination in the absence of trans protections to having NO statewide remedy.”

The agenda that drove HB2 is far broader than putting LGBTQ folks back into the closet, or making it more difficult than it already is for trans folks to negotiate public spaces. It is also an agenda that prioritizes corporate profits over living wages, that prevents municipalities from responding to the needs of its residents and workers, and that limits access to the courts. This is a scary precedent, and one that should chill you whether or not you are trans.

Hate and fear are emotions that cloud our judgment. Since this bill was successful, I can only imagine that we will see the same tactic used in other states where the feared group is immigrants, or refugees, or Muslims. The agenda behind it wants to keep us working a cross purposes and eating our own, and it helps them out when progressive movements are highly fractured. And the folks who benefit from this legislation are those who want to keep us all down to advance corporate profits over strong, healthy communities.

There is no doubt that we are living in scary and unpredictable times. The era of putting in your 30 years and retiring with a decent pension and a gold watch are over, but it’s not clear what is replacing them. Our nation is more racially, linguistically, religiously and socially diverse than ever, and this trend is likely to continue into the future. But we need to overcome this fear and instability by banding together, and remember to think critically about who benefits from splitting us apart.

Hello. I Love You.