We’re Here To Help is an evening of stories by six primarily gay and queer-identifying writers who are (or have been) in the business of sex. Organized by Matthew Lawrence the event is taking place tomorrow (Thursday) evening as part of Q30/30 Days of Queer Arts at 65 Eddy Street (behind City Hall) downtown. The reading starts at 9pm and will feature stories by Audacia Ray, Melissa Gira Grant, Matthew Lawrence, Maria Diaz, Lola D. Sorrow, and Will Vail. 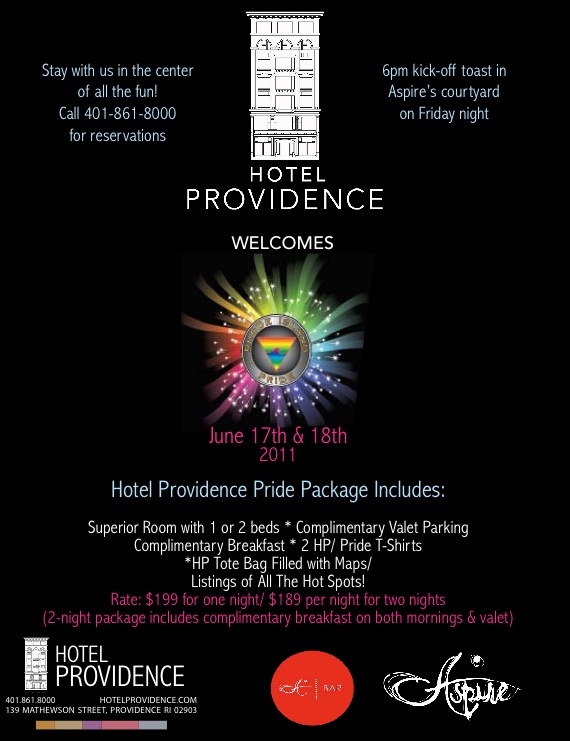 While Representatives in Rhode Island were busy passing Civil Union Legislation, in Connecticut (where same-sex marriage is legal) the House was passing a bill to ban discrimination on the basis of gender identity

HARTFORD —— After five hours of sometimes emotional debate Thursday night, the House of Representatives voted 77-62 to approve a controversial bill intended to protect members of the transgender community from discrimination.

The bill, which now goes to the Senate, would prohibit discrimination on the basis of “gender identity or expression” in employment, public accommodations, the sale or rental of housing, the granting of credit and other laws that fall under the jurisdiction of the Commission on Human Rights and Opportunities.

The bill defines “gender identity or expression” as a person’s gender-related identity, appearance or behavior, whether or not it is different from that assigned at birth or traditionally associated with the person’s physiology. Its provisions would go into effect Oct. 1.

When Rhode Island’s House of Representatives passed H.6103Aaa last night, it passed the most restrictive religious exemption attached to any civil union or marriage bill in the country, according to Gay & Lesbian Advocates & Defenders (GLAD). The bill’s language on reciprocity also creates arbitrary distinctions between the different forms of spousal protections for same-sex couples, causing continued uncertainty for legally married couples in the state. Beyond the inherent inequalities embodied by a civil union scheme, even the promise of comprehensive protections offered by this bill is seriously undercut by these provisions.

Everyone agrees that religious denominations should not be required to join any two people in any legal relationship – whether marriage or a civil union – that is contrary to their religious teachings. However, the religious exemption amendment goes much further in allowing religious charitable and educational organizations – such as social service providers, hospitals, and educational institutions – to treat legal civil unions, authorized under Rhode Island law, as invalid for any purpose.

Karen Loewy, Senior Staff Attorney for GLAD, said “This unprecedented exemption means a civil union spouse could be denied the ability to make medical decisions for her spouse in a hospital; it means that a math teacher at a religiously-based school could not get the same health insurance for his legally recognized partner that all other teachers receive. This exemption actually diminishes nondiscrimination protections in public accommodations and employment that Rhode Island employers and institutions have successfully lived with since 1995. It just inflicts gratuitous harm on Rhode Island’s gay and lesbian families.”

In addition, the bill’s silence on the situation of Rhode Island’s many married same-sex couples just perpetuates the inconsistent treatment those couples receive and creates a bizarre double standard between married couples and couples with civil unions. “Because Rhode Island is bordered by marriage states, many same-sex couples here are already married,” said Loewy. “The bill’s silence leaves intact the application of established marriage recognition law to their legal commitments. But it also gives an excuse to employers, government entities, and others who want to ignore their marriages, and provides more protection for couples in civil unions than exist for married couples.”

One such situation, said Loewy, is that of married couples who seek divorce. Civil union spouses would be able to dissolve their unions in Rhode Island, while married couples could not. “This is a seriously flawed bill,” said Loewy. “If it is not fixed in the Senate, there is trouble ahead for Rhode Island’s same-sex couples.”

Testimony from both sides of the Civil Union debate in the Rhode Island Assembly. Includes Rep. Frank Ferri’s testimony (at about the 1:30 mark).

If video will not play, visit ProJo.

Vyvyan hopes to be a way for the LGBTQ community to get our viewpoints into the mainstream news cycle quickly and nimbly in this 24-hour information age. Rhode Island is blessed with Options and Get Magazine and others as our gay press, sometimes though, information moves fast, and we can’t rely on the mainstream media to convey our thoughts or wait for the next monthly or weekly editions of the gay press.

Topics will range from same-sex marriage to gardening, transgender rights to financial planning; the whole spectrum of issues important to the LGBTQ community.

Vyvyan needs you to submit posts, while it is lightly curated, there are some ground rules for posting:

All that said, if you want to contribute to Vyvyan, send an email to hey@vyvyan.us. Vyvyan will post your submission under your name on your behalf. If you are interested in writing regularly on Vyvyan, an account can be set up under your name.

Vyvyan is a community tool, its future is in your hands. Feedback is always welcomed and encouraged.